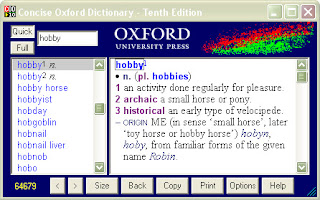 as defined by Oxford Dictionary, 'an activity done regularly for pleasure'
My pet question to people as an ice breaker or to break a silence:

In this digital age, the young ones would give an almost similar answer - mostly computer related. Even if it is essentially taking up reading as a hobby. You know, reading newspaper on the net, reading e-book, etc. The other generic answers from them would be the typical facebook-ing (is there such a word?), blogging, blogwalking, playing video games and computer games, and such. I'd be surprised if one would give me 'collecting stamps' as an answer. That would be too 80's, and now becoming rare at least in my circle (yes, I mingle with younger people too). However, it is surprising that most of the time people would give me "I don't know what my hobby is" and "I don't have time for a hobby". And a lot of them would be quick to give "sleeping" as a valid answer. Well, no wrong answer because it is really subjective, right?
There are expensive hobbies and there are simple and cheap ones. Interestingly, a certain hobby could be either. Of course, because there's a really wide spectrum and it really depends on whether you're really into it (read: obsession) or just taking it as a way to fill your time and make you feel human. Take fishing as an example. It could be a simple activity down the paddy field with a bamboo rod, or a boating trip in the Philippines. Err... it applies to cycling, too.
I do get interesting replies to that one simple question. One guy told me that his hobby is hunting. Looking at me being amazed, he continued, "wild boar, porcupine, ayam hutan (partridge?)". Looking at this guy, you wouldn't imagine that he's that type. And then the floodgate suddenly opened. His face really lightened up and he went on and on with the details of it. I asked that question to him while I was sleepily driving on the highway from KL back to JB. So I would say that besides coffee, another person's hobby could also relief you from the torment of staying awake while driving. But I have to caution you, though. If his hobby does not interest you, than you're added with another torture. Then again, you could always reverse that by telling him about your hobby instead. Hehe...
Anyway, it's a tool for getting to know people and also sometimes you'd gain invaluable knowledge about things that you've never even heard of. To take Carnegie's advise in How To Win Friends and Influence People, getting people to talk about things that they are passionate about is one of the things in 'Six Ways To Make People Like You'. There you go, building relationships.
So what's my hobby?
To put it simply: Reading. I read books, and nowadays more of cycling and gardening (lesser of the two) magazines.
I'd love to have cross-stitching as an answer, but to stick to the definition perhaps it is not.
Cycling? Nope, it's an obsession.
;)
What's your hobby, my dear friend?
typed thoughts by akmalhizam at 22:34

salam, I am an English Language teacher my self and I feel great to find someone like you who persistently blog about things around you that arouse your readers' interest!