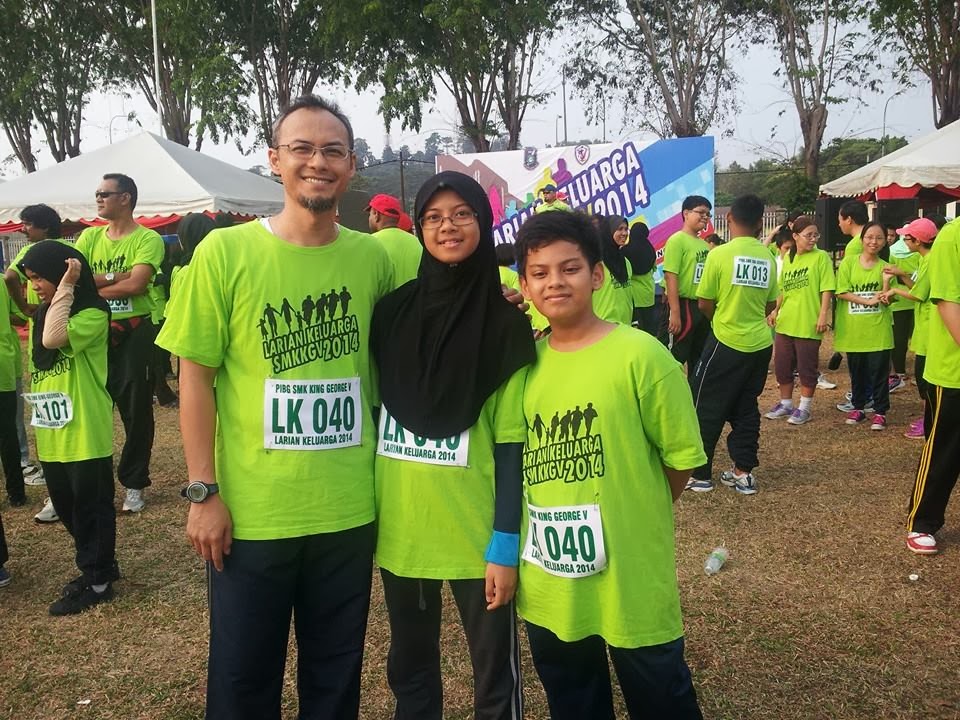 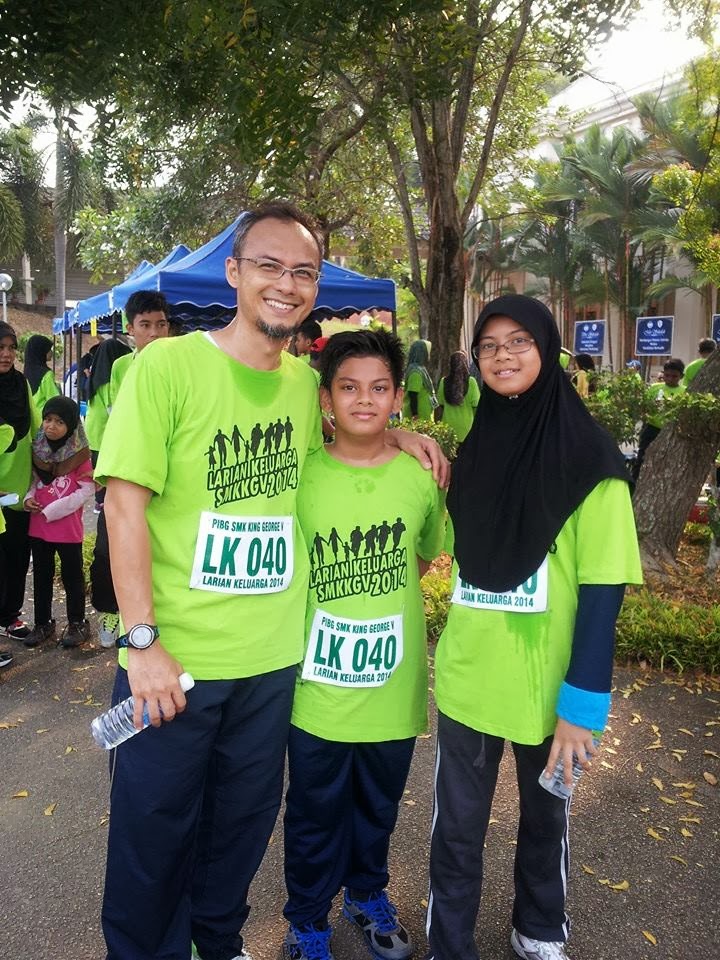 before and after 3km

We were automatically eligible to participate (in a group of 3 family members) as Marsya managed to raise more than RM100 through the jogathon donation round (remember those yellow cards?).

It has been more than a month since my last run, which was a boring 4km around the track at Kompleks Belia dan Sukan Paroi. However, I did some 30km of cycling a week before than in JB; so I guess my fitness is quite okay for a short recreational run. Well, I don't know about the level of fitness or readiness for Marsya and Adam...

The day before the event, we had a small feast at home entertaining my cousins from KL. Adam sort of hurt his back while attempting to bring down the stairs our big table. So he kind of making that a viable excuse not to take part in the run. Anyway, he didn't make a big case out of it, so I was fine with it.

Before the actual running, (as usual, for this sort of event) we warmed up with aerobics exercise perhaps for about half an hour. I guess Adam's back is okay, as I observed that he moved and followed the steps without much problem.

We were flagged off at about 8.50am, starting from the school's main gate. We were somehow left at the back of the herd early on, as the three of us took it slow and walking to lose free from the crowd.

Marsya sped off to the front while Adam started running and having a small complaint about his back. I shrugged it off and told him to take it slow and not to pay attention to his back. So I used my little mind trick on him, and eventually for Marsya too.

I played with him the aiming game. Along the run, I set several aims for him to reach.
"see that lightpost up ahead?"
"the third flag pole"
"that big tree"
"the big green signboard"
Anything that is visible to him along the course, reachable and not too far; perhaps about 50m each (yes, there we a lot of aims).
The goal was to keep on running, slowly but surely. When he resorted to walking, I asked him to walk briskly. Just as Adam is about to reach the current aim, I'd give out the next aim that he ought to reach. And it went in perpetuity.

Marsya was doing fine during the first half of the run. Then she started to slow down her pace and resorted to walk more. So the trick I had on Adam was shared with her too, and we ran as a group with me constantly giving out the small aiming distances.

We were supposed to collect 3 tokens at 3 checkpoints along the 3km distance. I guess it would be 1 token per km. However, I estimated it was more than 1km out but no CP in sight. Finally we came to the (only) CP, and my Sports Tracker showed it was already a little bit past 2km. So we cleared two-third of the run without much suffering. Good sign. And good job to both of them.

Soon after that, perhaps because of being a little bit excited, I temporarily lost my control and sprained my right ankle. It was not serious, so I kept on trotting ignoring the pain. Not long after that, we reached the starting point and completed the 3km loop. All in about 30 minutes. Not bad at all.

I for one, was really proud of Marsya and Adam for their perseverance. Well done, you both!

I'd say 3km is quite a long distance for beginners. Plus the course around Seremban is hilly. That's some achievement to build on. Perhaps regular runs after this? InsyaAllah.
;)


typed thoughts by akmalhizam at 18:48