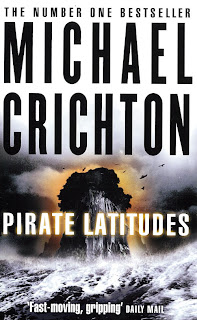 My review for MC's novel in Goodreads.
I had a 'like' yesterday morning, so I thought I'd share it in here too...
=====
It took me quite a while to get the momentum rolling at first. I find the book giving it's grip after more than a dozen chapters - thence I find it hard to put down, and always looking out for whatever spare time I could have to continue.

In the beginnning I was bombarded with characters who emerge, and new ones continue to be introduced, until a few chapters. Well, it goes to show that MC is crafty, and these different characters have their purposes. They play different roles, and as MC's narration to educate the reader on many aspects that he wishes to tell in this book.

This time, he tells about cannons and maritime warfare in old waters. Surprisingly, there's not much detail on piracy (or privateering). Seamanship and maritime jargon are abundant - make sure you know the terms, for there's no glossary provided.
:P
Thank goodness, having worked with a maritime project, I don't have to get a dictionary to understand the various terms.

As always, there's the plot of cunning, wit and bravery of it's main character, Charles Hunter, in his attempt of getting a considerable sum of loot while no one believed it to be possible. Of course, he's not alone doing the job. His accomplices are a team of colourful characters who complement him nicely, though at times are too good to be true.

Reading this is a reminiscent of The Great Train Robbery, a favourite of mine, and the modern day's Ocean's Eleven. Of course, this one is set on a different mode of transportation.

If Timeline introduced me to the trebuchet, greek fire and other medieval warfare, weaponry and war tactics, this one is about the same. I learnt a bit about ship cannons, sea warfare and its tactics.

Many characters are killed in this one and there are many events taking place, however I find that the descriptions are too brief, and they can be further extended, albeit they are grippy still.

Somehow I find it hard to believe that this is a complete work of MC, as reported to be found in his computer. It seems like there's something amiss; not really meaty and lacks a bit of punch. Nevertheless, it doesn't feel like it's not MC at all. For that, it is a great read. That is, when you've gone past the characters introductions.
=====
typed thoughts by akmalhizam at 08:18