indeed they are, depending on their mood. well, most of the time they are.
well, i don't know that much about cats, but I've been living with them more than half of my life.
Naza shares this liking with me. Her sister even more - brought back a cat from Manchester, and now living with two big cats in KL (one rescued from RSPCA Ampang, another brought back from Plentong).

therapeutic
stroking their body gives a nice sensual feeling to your hand (or feet - try it).
even when looking at them from far, would induce a smile on my face.
it's a welcoming sight to see them walking lazily, grooming busily, fast asleep without a worry in the world, or my favourite - kittens wiggling their backside while in a stealthily low stance ready to pounce another kitten.

friendly
especially of the siamese breed (like the one in the photo).
i don't really know about cat breed, but i just refer to the likes of the siamese breed.
they are very fond of human. whether you're at a friend's or a stranger's, their cats of that breed will surely come up to you and twirl around your leg. take it as a complimentary massage.
i love those.

clean
yes, they spent many hours of the day grooming (besides sleeping).
they bury their droppings.

tough
they say cats have nine lives.
of course it's not true, but i do know one truth - they are tough creatures.
once i had a birman who was in a sorry state. she had bad wound on her ear, and went missing for few days.
housefly went on her and laid eggs on the wound. later it turned into maggots and had eaten up her left ear, and part of the head. yes, it is scary. the stench is unbearable even for me.
still, she marched on and not a hint of pain displayed through her face.

playful
even the king of cats and his cubs living in the savannah are playful.
especially kittens, they play all the time, like my kids.
but unlike my kids, they don't play while having their meals.
i used to come to school with fresh scars. my teacher casually quipped: 'i see you've been playing with cats'. only a cat lover would know another. 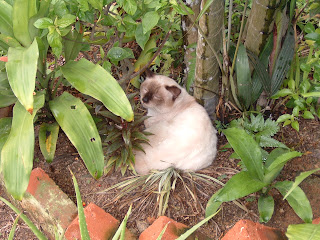 ats come and go. some just went off without saying goodbye. some were found lifeless somewhere around the house - the result of previous night's brawl. two died on my lap - one hit by a car while happily crossing the road coming towards me, another slowly losing her life (and unborn kittens) due to poisoned rice meant for rats.

over the years, the yard around the house in Plentong is like a pet cemetery. i never counted how many of them, and they were not marked. My late Abah did one tombstone for Keng (Akak's cat from Man), though. It's always a sad thing to bury a cat, a kitten very much so. I wish I wouldn't have to do it, but it's inevitable.

the house in Plentong is like a cat magnet. often there'll be a cat coming round the house. and stay for good (of course, where else they could get Iams for free?). many times also kittens are brought back home - Naza's the one who does this. The latest, we brought home a kitten from Jusco Tebrau. It was raining, and he was lost, treading alone on the divider.

i like the fact that there are cats around the house. they somehow bring the air of peacefulness.
while typing this, i'm smiling thinking of them.
ahhh... those charming little creatures.
typed thoughts by akmalhizam at 12:48