Melaka: A' Famosa vs Proclamation of Independence Memorial

A' Famosa - the famous one.
Proclamation of Independence Memorial - huh? Which one eh?

We went to Melaka on the way back to JB during Deepavali weekend.

It was overwhelming how Bandar Hilir has transformed.
I parked the car a bit far from the famous A' Famosa, so we had to walk past Muzium Islam.
Right in front of it is this interesting big tree: 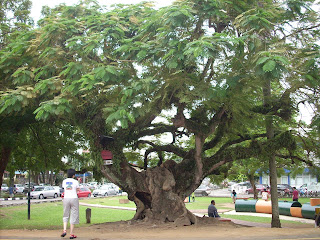 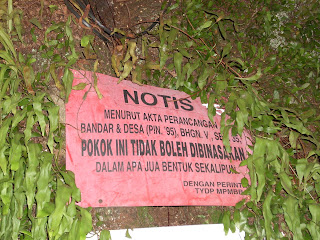 this tree is not to be destroyed in any manner whatsoever.
but you can nail the notice on it, though.

The purpose of visiting Bandar Hilir is to serve as an introduction of the famous A' Famosa and surrounding buildings to the kids. Well, only Marsya went with Naza and I. Adam stayed in the car with Mak - not feeling well. 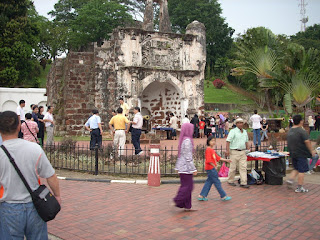 Naza and Marsya walking past A' Famosa

Alfonso de Albuquerque started the construction of A' Famosa in 1512 from which they fended of attacks by the armies of the Sultan of Melaka and Acheh for well over a century.
The Portuguese used slaver labour to construct this squarish fort surrounding Melaka Hill with walls 3 meters thick using parts from demolished palaces, royal mausoleums and mosques.

Apart from the appalling English grammar etched on the info stone, the more atrocious fact laid down plainly is "...using parts from demolished palaces, royal mausoleums and mosques".
Damn. 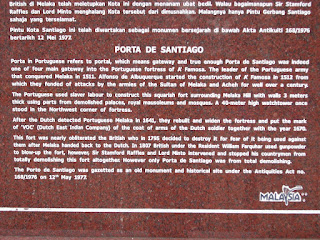 the info stone. see how many grammar or typo errors you can spot.

Marsya and I went up the hill to take a look around, and have a view from the top. Quite nice - you could observe the prosperity that showers Melaka, except the sea shore. 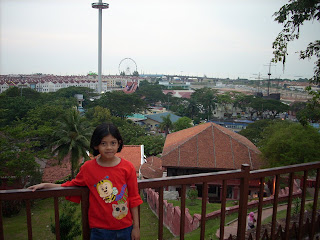 Also there's a 'wishing well' in the remnants of building (used to be a church by Dutch, then as a gunpowder storage by British). What struck me was that people throw in coins in the 'well'. I don't know why. I bet they also don't know why. The bigger question: who would eventually collect the coins? And what would they do with it?
Anyway, I told Marsya that we Muslims do not do such things. If we wish for something, we ask Allah by reciting du'a. No need to throw in coins and make wishes. 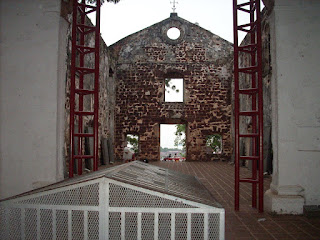 I love to look at the memorial tablets lining the walls inside the building - for it's artistical values. And it's ancient. I like 'em.
Nearing maghrib, we went down.

Opposite of the fort stands a solemn building, though not that attractive to local tourists. Perhaps because it is closed during the time I was there. 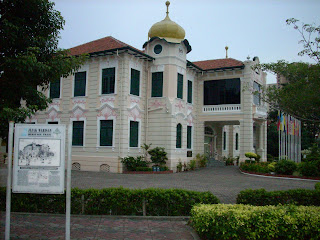 The Proclamation to Independence Memorial is important to our local history for this: it houses an exhibition that traces the history of the nation's journey to independence (as the sign says). 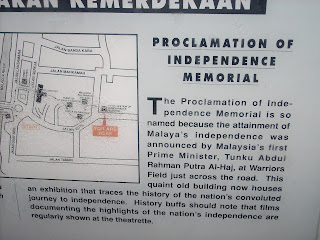 What I like about it is that it is erected right in front of A' Famosa, and across Dataran Pahlawan. Simply poetic.
typed thoughts by akmalhizam at 12:58